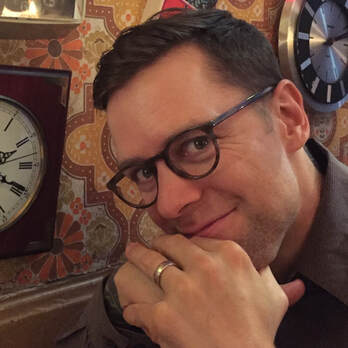 Zach Fehst writes stories that are big on mystery and adventure. He also hosted the Emmy-nominated nature show, “The Ultimate Guide to the Awesome,” on the Discovery Kids network. He is married to author Heather Demetrios. His novel American Magic is out now from Simon & Schuster (Atria/Emily Bestler Books). His writing also appears in the YA anthology Dear Heartbreak published by Macmillan (Henry Holt). He has traveled to over thirty countries, but makes his home in Durham, North Carolina. Find him online at zachfehst.com.
Excerpt from an interview with Zach published at Paulsemel.com:

Now, when it comes to stories about magic, there are many different ways it can work. How does the magic in American Magic work?
It was important to me to establish rules about the magic very early on in the writing process. Often, when I read other stories with magical elements, the rules seem frustratingly arbitrary. Why can a person conjure this thing, but not that thing? Why can they do this but not that? So I tried to avoid that by clearly keeping the performance of magic tied to specific incantations, all of which are tightly guarded secrets, and many of which have been lost to time. I tried not to cheat.

Are there any writers or stories that had a particularly big influence American Magic?
I read lots of thrillers growing up, and I tried to channel into my book what I first loved about the stories of genre heavyweights like Robert Ludlum, Clive Cussler, and Dan Brown. Their books read like gangbusters. I hope American Magic feels like going on an adventure with a team of characters you’re excited to hang out with.

What about non-literary influences: movies, TV shows, video games. Did any of those have a big influence on American Magic?
I studied film and television at the University of Southern California, so I’m always thinking in film terms when I write. I’m imagining camera moves, wide shots, close ups. When I revise I imagine I’m cutting a scene together, deliberately gauging the pacing for maximum impact. I don’t know about specific non-literary influences, though I will say I often wrote with the Bourne Identity film soundtrack playing in the background.

Teaching Philosophy
I’ve been teaching for over thirteen years, and one thing I know for sure: no matter where you’re starting from, you can get better. ​