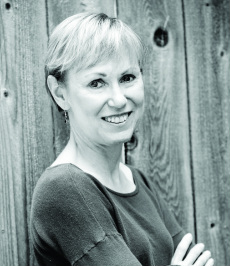 The granddaughter of immigrant coal miners, Marian Szczepanski used her family background as inspiration for Playing St. Barbara (High Hill Press, 2013), praised by Huffington Post as “a stunning debut novel that shimmers with unforgettable characters while casting necessary light on a dark chapter in American history.” Her short fiction has garnered the DeMaine Award for an Emerging Writer from Clackamas Literary Review. She has received fellowships, grants, and awards from Hedgebrook, Vermont Studio Center, the Writers’ Colony at Dairy Hollow, and the Houston Press Club. She holds an MFA in fiction from the Program for Writers at Warren Wilson College and a BA in American studies from the University of Notre Dame. Named to the Houston Press roster of “100 Houston Creatives” for 2014, Marian teaches creative writing workshops at Writespace and beyond.

Deirdre Sweeney saw him first.
She sat on the hillside above The Hive’s baseball field, where the fans’ silence further thickened the cinder-ridden air. It was the bottom of the ninth in the season’s home opener, and The Hive, defending Frick League champions, trailed Buffington by two runs. Holding breath and tongues and a dwindling sense of hope, everyone surrounding Deirdre had eyes only for the batter’s box. A peculiar glint, however, lured her gaze away from the field. Disbelieving her eyes, she blinked, stared, then blinked again. No miner had thrown a stone, much less walked off the job, since the Big Strike’s eighteen miserable months had ended last October. Still, there was no denying that a new policeman stood beneath a wizened crabapple tree ten yards or so behind the home team’s bench. His badge shone as if placed in the path of a sunbeam. The sun, however, hid behind the smoke of three hundred beehive-shaped coke ovens that had given the patch its nickname. Surrounded by stinking haze, the shimmering badge seemed all the more unsettling.﻿﻿

“Marian's enthusiasm really made me want to listen, pay attention, and learn. I also really liked all the objects she brought in for us to write about. Getting to write based on an object was really inspiring. This workshop was really inspiring, because Marian is such a passionate teacher.”

“I really enjoyed the exercises, but her style is really wonderful. I always enjoy teachers who love what they are talking about and get excited about teaching it.  This whole workshop gave me a lot of ideas and a lot of new ways think on things.”
Teaching Philosophy
My goal in workshops is to encourage each student to explore his/her unique creative vision and become a more confident, skilled writer. I teach the way I was taught: to read widely and critically in order to identify and study the essential elements of craft, to apply those elements to my own work, and to embrace the discipline of revision. I'll introduce craft issues (characterization, setting, dialogue, etc.) with a brief lecture format, but my main focus is offering students short excerpts from literary works, both classic and contemporary, that demonstrate those issues. The excerpts provide the perfect springboard into discussion and in-class writing exercises. If each student leaves with at least one new idea he or she can immediately apply to work-in-progress or use as a kick-start to brand new work, I will have done my job as teacher.