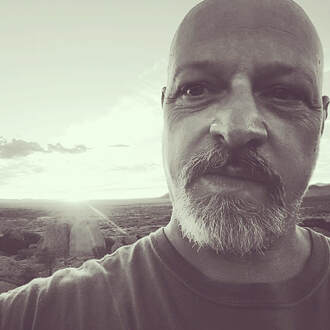 Patrick Stockwell is a native of Houston, Texas living and working in the Texas Hill Country. He holds an MFA in Creative Writing-Fiction from New Mexico State University. His novella, The Light Here Changes Everything, winner of the 2018 Clay Reynolds Novella Prize, was recently published by Texas Review Press.
Excerpt from his novella The Light Here Changes Everything
[Sophie] stopped listening immediately and let her eyes run away, across the grass, along the ridges, pausing to follow a hawk’s circling until it disappeared behind the sphere of a bush. Here they were about to turn away from the most inexplicably profound experience of the past year, and instead of celebrating the experience with her, he was doing what he did best— overwhelming the present with the burden of useless talk.

During the car ride back to the hotel, Sophie sat with the absurdity of Sid’s idea that they might someday lose the memory of the ruins. For years, he had watched her addiction with some distance, wanting her to be healthy but not wanting to let go of the parts that served his own desire: her tendency to say yes to almost anything or the free pass that her mistakes provided when he spent too much money and refused to explain what he’d been up to. Had he never noticed how hard it was to not be consumed with thirst, with endless wanting? Had it crept past him that she had brushed against a lasting peace?
​
In the end, she found herself swallowed by the idea that she could ever forget that place, that it might be reduced to some neglected impression. The wild abandon of being naked under the open sky with him inside her, thoughtless, consumed with nothing but the silence of the desert and the hard won privilege of needing nothing more.

Recommended Books for Aspiring Writers
Teaching Philosophy
To develop a solid writing practice, it is important to acquire the skills necessary to identify good writing while cultivating an intuitive sense of what is working on the page. In this way the writer learns to constructively and effectively critique the work of others and, perhaps more importantly, evaluate their own efforts with honesty and compassion. A creative writing classroom should support the individual as they seek to locate and establish their own voice within the larger writing community.​