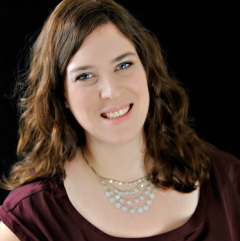 Cassandra Rose Clarke's novels have been finalists for the Philip K. Dick Award, the Romantic Times' Reviewer's Choice Award, and YALSA’s Best Fiction for Young Adults. Her short fiction has appeared in Strange Horizons and Daily Science Fiction. Her latest novel is HALO: Battle Born, out now from Scholastic.

Cassandra graduated in 2006 from The University of St. Thomas with a BA in English, and two years later she completed her master’s degree in creative writing at The University of Texas at Austin. In 2010 she attended the Clarion West Writer’s Workshop in Seattle, where she was a recipient of the Susan C. Petrey Clarion Scholarship Fund. Visit her online at www.cassandraroseclarke.com

Eventually, the woods opened up into the clearing that housed the cemetery. Cat climbed over the sagging, rusted metal fence. The lemony sunlight made her eyes water. It was the right time of year and the cemetery was covered with a thick blanket of wildflowers: bluebonnets and coreopsis, black-eyed Susan and phlox. She knew most of the names from picking bouquets here with her mother. That year the wildflowers were so numerous Cat could only make out the very tops of the gravestones, most of which didn’t even have names on them, only initials and dates from two centuries ago.

Cat turned around, half-expecting Finn to be disappearing in a cloud of light or steam. But instead he stood at the edge of the cemetery, wildflowers rustling around his ankles.

"That’s what my mom always says." Cat frowned. This must not be the right cemetery. Finn took a few steps away from the fence, toward the center of the cemetery where the old oak tree twisted up against the cloudless blue sky. Cat trailed behind him. The sun reflected off his dark hair. He stopped, tilted his head toward the swaying, rippling flowers. Cat froze. Maybe he had found his grave.

But Finn just scooped something up off the ground. He turned toward Cat. He smiled. Cat decided he had a kind smile, even if he was a ghost. She took a few hesitant steps forward, and Finn uncapped his hands. There, bright against his curved palms, was an enormous black and orange butterfly. It fluttered its wings once. Cat leaned in close and saw the tiny fibers on its black antenna.

"I like how organized Cassandra was, and how each class was divided between discussion and writing exercises. She was also very flexible about meeting the needs of the group."

"I like that the group wasn't very large, and that the lessons were interactive, not just lecturing."

"I really liked how Cassandra broke stuff down on each weeks topic so that we got a working knowledge of the subject. I really liked the interactive games or activities we did."
Teaching Philosophy
Students should be the focus of a classroom, not the teacher. I want my students to be as involved as possible in the learning process.