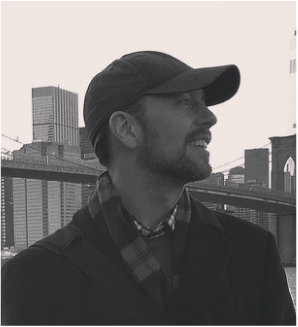 Adam Holt left his perfectly good teaching job in 2012 to pursue a writing career. His poems have appeared in publications by Mutabilis Press and SMU’s Journal of Liberal Studies. As an indie author, he has published two novels, The Conspiracy Game and The Rathmore Chaos, the first of five books in the Tully Harper Series. Fans and friends helped him raise over $10,000 on Kickstarter crowdsourcing site to fund the venture. He has since advised other indie writers on how to publish their work and launch crowdfunding campaigns. Adam visits schools to run writers’ workshops for middle school and upper school students. Adam received an MLS from Southern Methodist University in 2010 and a BA in English from Baylor University much earlier than that.

On the warm hood of the Pontiac
I lace my fingers behind my head
and sink into autumn air.
My father does the same.
I feel his voice through the hood
as it stretches to the stars.

My father tells me
looking into the night sky is looking back into time itself,
that the light we see from the stars
is not as it is but as it was
a thousand generations ago.
My mind wobbles under the sparkling black dome,
revels in incomprehensible glory.

I am seven.
I want to understand.

I look at the sky but really I watch him watch the sky,
feel the rumble of his voice in the hollow of my chest
and the hollows beneath the Pontiac’s hood.
I wonder into him:
what makes a man see the ever-present past?
What is time in the presence of ever-arriving light?
Here, in this momentlessness, time unhinges.
My father becomes the million year old starlight,
and I have never aged since.

Somewhere in the dark Houston night
we both still lie-with laced fingers-on a rusty hood,
a thousand generations beside us
all naming long-dead, ever-living stars.
Here I am: seven forever,
wanting to understand.

Student Testimonials
Adam Holt provided expert editing and unlimited consultative advice during my writing of the biography The Man in the Red Tie: Professor Harold Jeskey. Should I write another book, Adam will be my first choice for editor and advisor. -- Dr. Sterling E. Moore