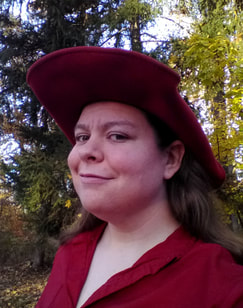 Arianne "Tex" Thompson is home-grown Texas success story. After earning a bachelor’s degree in history and a master’s in literature, she channeled her passion for exciting, innovative, and inclusive fiction into the Children of the Drought – an internationally-published epic fantasy Western series from Solaris. Now a professional speaker and writing instructor at Southern Methodist University in Dallas, Tex is blazing a trail through writers conferences, workshops, and fan conventions around the country – as an endlessly energetic, relentlessly enthusiastic one-woman stampede.
Excerpt from LitReactor interview:
What’s your best, favorite, or most unusual advice for aspiring authors?

Here’s my vote: if you want to do something that hasn’t been done before, include someone who hasn’t been included before – especially someone who “can’t” or “shouldn’t” be there. There are a million post-apocalyptic dystopias out there – but show me how a Type 1 diabetic survives after the electricity goes out and the insulin spoils, and I’ll buy that story in a hot minute. The bookshelves are saturated with old-school quest fantasy – but show me what happens when the Chosen One who pulls the sword from the stone is a single mother of three, and I’m a fan for life. There may be only a half dozen plots in the world, but there are a million characters – and most of them have barely been touched. You can help fix that!
Recommended Books for Aspiring Writers
Teaching Philosophy
I believe in realness. I believe in interactive, high-energy conversations – not lectures. I believe in exploring big ideas – not following a sacred formula. I believe in critical thinking, omnivorous learning, and ditching whatever advice or critique doesn’t personally resonate with you. I believe in a classroom culture that fosters compassion, camaraderie, and creative bravery. I believe good teaching is good storytelling: involving the reader/student as an equal partner in the adventure. I believe enthusiasm is both transformative and contagious. I believe students should leave a workshop feeling pumped up, wrung out, and clued in. I believe what you are doing matters!