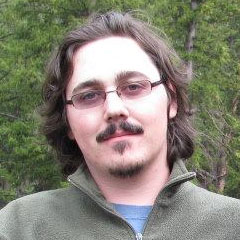 K. J. Russell is a speculative fiction author and anthologist from Colorado. While studying creative writing at the University of Denver, he placed in the Zharmae Publishing Press' annual short story competition. His winning story, "Absolute Tenacity," was then published as a stand-alone novella on Amazon, where it was received with acclaim. A member of both the Rocky Mountain Fiction Writers and the Houston Writers Guild, K. J. Russell edited the HWG's science fiction anthology, Tides of Possibility, and organized and managed a highly successful Kickstarter campaign to publish the print edition of the book. He will be reprising his role for a forthcoming fantasy anthology.

His energy for helping and teaching others has lead him to appear frequently at local events. K. J. Russell has been a speaker at the HWG's annual convention, and has moderated literary panels at Houston's Comicpalooza comic convention. Frequently seen tapping away on a laptop in the corner of area coffeehouses and cafes, some suspect that he is a mustachioed robot powered by coffee and good science fiction.

“Kudos to Mr. Russell. He is very knowledgeable, kind and caring.”

“I don't know, the way Kyle explains things and how he looks at the innards of story writing, I just get it.”

Teaching Philosophy
The writing craft is the primary concern of a great writer. It is a skill that is best learned by teaching, by making mistakes, and by synthesizing other's ideas with one's own. The workshop is a place for bold writing without fear of experimentation. Writers who share their work loudly and openly, listening carefully to the reactions and criticisms of others, will see their craft improved measurably not just class-to-class or week-to-week, but in a single day, or a single hour.