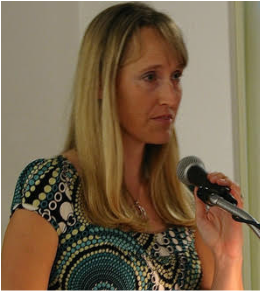 Elizabeth White-Olsen is the founder and former director of Writespace. She has two Masters of Fine Arts in Writing degrees. She earned her first MFA in Poetry from Texas State University in San Marcos,  and her second in the renowned Writing for Children and Young Adults program at Vermont College of Fine Arts. She graduated from Texas State's MFA program with a 4.0 and with Distinction. At Vermont College of Fine Arts, Elizabeth moderated the VCFA forum's Crafty Monday discussions and was nominated for the Thesis Prize.

Elizabeth has fifteen years of professional writing experience, and her poems and articles have been published both online and in print journals. She currently writes for Houston Chronicle Gray Matters blog and is the author of the poetry collection Given Words.

We begin at the back of the drive,
his right hand on the handlebars,
his left on the seat.
We reach the road, his feet a clap
over the whish of the wheels,
his breath in my ear.

He gives a push then lets go,
the houses on both sides
begin to blink.

I'm afraid, then go forward
into a new stillness.

The tomato plants had grown through July,
becoming heavy and uncontrollable as our grief.
We tried to stake them up, but our stakes
weren't tall enough, so we let them hang and sag.
We knew the fruit would grow large enough
to take down the plant, but we would get to them
in time, cut them and eat them.

Madeline knew she wouldn’t be able to sleep, so she let herself remember.

The clown and his hyperactive poodles.

The lion. And, of course, the fat lady.

Papa Pedro would spread the red handkerchief across her pillow, arrange the circus piece-by-piece, and then hum, wave his hand, and snap his fingers. The clown usually went first. He would juggle Tic-Tacs while his poodles did flips and chirped like crickets, which made Madeline laugh. The strongman would bluster as her grandfather handed him heavier and heavier weights—a Q-tip, a pen cap, an eraser. Once when Papa Pedro handed the strongman his watch, the strongman fell backward, and Madeline had to cover her mouth so as not to embarrass him. The sword-swallower would swallow his pins, and then breathe fire—Papa Pedro would hold his pipe down, so the little man could light it for him. When it was the lion’s turn, Papa Pedro would hold one of Madeline’s hair-bands up for the lion, who would leap right through, then purr like a kitty, which made Madeline laugh hard again. At the end, the fat lady would sing a tune by Michael Jackson or The Bangles or U2, and Madeline’s stomach would burn from laughter. She would fall right asleep and dream amazing dreams, such as that she flew over mountains, or lived in a castle, or regularly visited the folk of distant planets in her role as an intergalactic emissary.

It seemed like the magic was only there when Papa Pedro was in the room, but sometimes Madeline would awake to purring and the lion would lick her fingers. She would turn the light on and pet it carefully with her pinky until it stretched its long neck and grew as big as a squirrel. Then, it would perform bigger and better tricks, such as cartwheeling along the foot of her bed and bowing profusely afterward.

When Madeline would finally get tired, the lion would nuzzle into her neck. Its fur was soft as a rabbit’s and always warm.

"Elizabeth had a wealth of knowledge about writing that she shared in every class. She was very effective in leading conversations, always ensuring we identified what was working in a story and when the writing could be improved. I believe the experience of critiques was valued by everyone, because of the way she led them."

Teaching Philosophy
I am passionate. Even though I may seem like I "have it all together" in the classroom, I always make a point to give myself permission to be on the verge of losing control--in a good way! Give me a paragraph that lacks a clear point of view, convincing sensual detail, or a strong sense of voice, and you will feel tremors in the room as I begin to ask my fellow writers questions that open their eyes to new solutions.